On RPG Campaigns/Settings I Would Totally GM 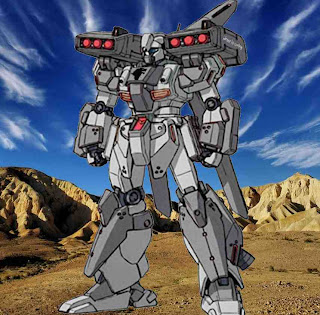 My vision for this setting is as follows:

One part A Song of Ice and Fire (as above, but with less mysticism and even more GRIMDARK and trolling)

One part Gundam (for the giant robots, naturally)

I freely admit, this setting is totally just my fiction fetishes rolled into one sexy package full of gritty violence and PTSD.  I do love the idea of giant robots not just as weapons of war, but as ancestral symbols of authority (The Five Star Stories, Knight Titans in the old Warhammer 40,000 Epic fluff).


System of Choice: Probably Rogue Trader, either using the internal vehicle rules (in Into the Storm) or, more likely, doing a partial homebrew system for the mecha (possibly based on that of Adeptus Evangelion, though I'm not familiar enough with it to feel terribly comfortably to saying with any certainty that I like its mecha combat rules).  I have been meaning to take a closer look at Heavy Gear, and I could probably cull some fun rules and tables from Mekton, if it came down to it, even if I'd prefer not to grapple directly with its rather '80s rules.

This may sound like a weird one because I frequently disparage Bleach, but roll with me for a second.  Bleach is a mediocre to bad story set in a really cool, fairly fleshed-out universe with reasonably consistent but not overly restrictive or arcane, or full of exceptions created purely for the purpose of creating exceptions (cough*NASU*cough) rules.

Besides that, for all the plot of Bleach lacks, its characters are pretty cool, in generally, and set some pretty creative precedents for powers.  The fact that Bleach would lend itself very well to an easy mission-based setup (Soul Society and the Thirteen Court-Guard Squads were basically built to provide structure for roving bands of adventuring PCs who hunt Hollows, deal with ghosts' problems, get up to shenanigans in the mortal realm, etc) is just gravy.  It's relatively low on my list of things I want to run, to be sure, but it's still nice to know it's out there as a possibility.

System of Choice: D&D 4th Edition, probably.  In Bleach, stuff pretty much just happens - martial techniques and magic usually work as intended (though they may not be effective against a given target, they WORK), so DH/RT/DW/BC's systems that operate around a fairly high failure percentage and spells going wildly and hilariously wrong run a bit counter to the setting.  What's more, zanpaktou limit levels (Shikai, Bankai), powerful kido (spells), and other techniques fit far better with the Encounter Power/Daily Power dynamic than DH/RT/DW/BC's high-failure-but-infinite-attempt* model for magic.

Finally, nobody ever dies in Bleach.  Just like in D&D 4e.

As an alternative, I would consider Deathwatch or Black Crusade (since Battle-Brothers and Heretics are far less subject to the high failure rate than Explorers and especially Acolytes), but for the above reasons, I think these systems fit a bit less well with the setting.  Interestingly, Orpheus could work very well for Bleach simply based on how much thematic (and thus mechanical) overlap there is between the two settings.  But Orpheus is kind of a rules trainwreck, and what's more, just doesn't have the raw breadth of content that I'd like to see for Bleach (which D&D 4e probably exemplifies best - each class has assloads of options for powers, further opened up by multiclassing, etc).  I'd consider looking at Geist: The Sin Eaters, the spiritual if not direct successor to Orpheus, but that said, I'm generally not a fan of the way World of Darkness handles dice, even if New WoD is less broken.

*(infinite until you get eaten by daemons)

Despite lacking any real giant robots, Avatar is hands-down my favorite TV series, and I'd love to run a campaign set in the Avatar-verse.  As such, I think it hardly needs an explanation for why I want to run it.  That said, I will expound a bit more, but I'll keep it brief:

-Avatar's timeline is COLOSSAL, judging by how many Avatars statues were in the Eastern Air Temple.  What's more, the Avatar, the one of the few lore characters who spans this timeline can (and indeed, must, many, many times) die, meaning that nobody (excluding a few Spirits) is necessarily protected by causal plot armor.

-The series opens many doors but leaves many potential plotlines untapped.  In other words, free content for side-quests, if not the whole campaign.

-I want to make up my own horrible new abomination animals.  Shark-Bees, anyone?

(Edit: KillHammer beat me to this one, apparently.  I must grant props where props are due.)


System of Choice: This one would be a lot of work no matter how you slice it, because I like the idea of using D&D 4e's power scheme for Bending, but, unfortunately, because of the way powers are tied to classes, it would really mean creating at least four whole new classes (which would not be available on the Character Builder - no small downside), balancing them, creating feats and items to support them, etc.  Realistically, I would probably handle this by simply working with players to create appropriate powers for their characters as they needed them, but even that would mean a fair chunk of extra work that usually isn't necessary.

I would actually pretty strongly consider trying to find a new setting that had specific rules for custom-created powers if I had concrete plans to run an Avatar campaign, since this would allow me to leave new powers almost entirely in the hands of the players. 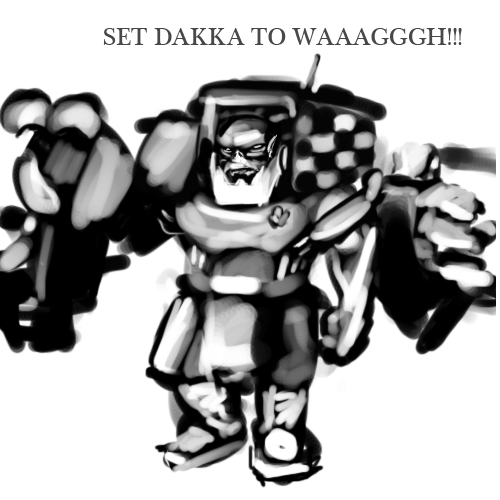 Rogue Trader.  But everyone plays an Ork.


There are others, of course, but these are the ones I felt like about writing about right now.

I'll be honest, I'm only posting this here because I don't care to create an account at an image-hosting site but I want to link it somewhere.  So another thought is churned out from the roiling sea of my mind and washes up on the shores of my blog, forlorn and without particular reason to be here.

Created for use in a conversation here, if anyone is curious (and for my own bookkeeping).

On OH SH*T I F*CKING KNEW IT

HTMC recently sent me a link to some photos of Gainax's building's walls. 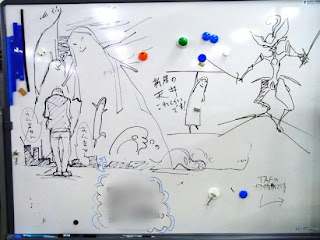 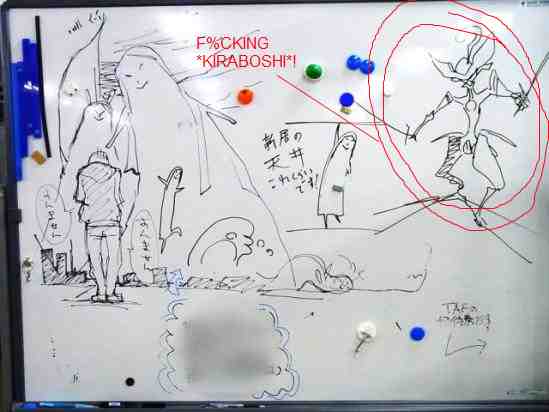 I SUCCESSFULLY PREDICTED THAT THE PEOPLE WHO MAKE ANIME WATCH OTHER COMPANIES' ANIME.  THIS IS AN ACHIEVEMENT IN PROPHECY FOR THE AGES.

But seriously, I'm calling smug and insipid "Called It" rights when there are some Star Driver references in the next Gainax Super Robot series that I grudgingly watch and then incessantly whine about. 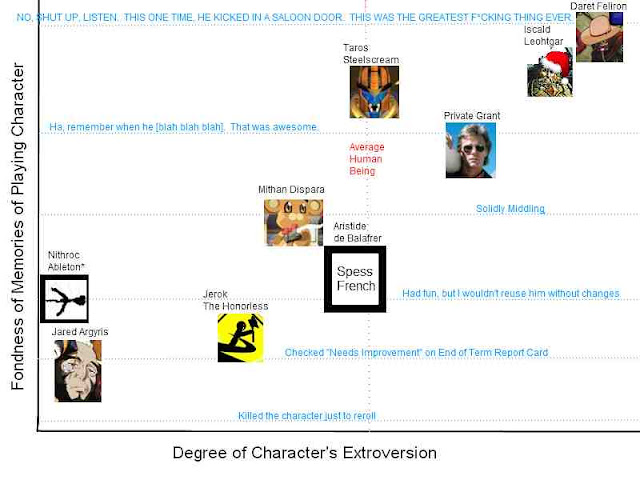 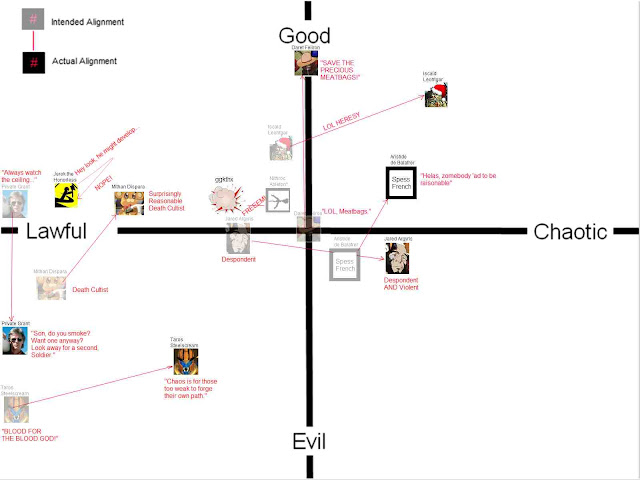 Edit:  In response to some very reasonable confusion, I'm going to go ahead and explain that the first chart has a fairly obvious point ("extroverted characters are more fun for me to play, or are at least more fun in retrospect") and the second chart has no point whatsoever (I made it purely for my own curiosity to see what trends would arise, but none did, really).  Okay, revisionism over, back to your regularly scheduled post.