To explain/kill the joke: I expected Fullmetal Alchemist dressed up as Bleach.  I got Bleach dressed up as the Warhammer 40k Inquisition.

Admittedly, Wakfu does show the influence of both ATLA and Asterix Le Gaul (especially Asterix).

Email ThisBlogThis!Share to TwitterShare to FacebookShare to Pinterest
Labels: Blue Exorcist, Low Blather Count, Wakfu, What I Watched/What I Expected/What I Got

It's been a while since I engaged with that image meme I love so much, but for a while, I had only a one or two role playing characters to meme up, and it was hard to get started.  Then when I got to critical mass, I was just lazy.

Well, I expect to drop another one of these posts in a year or so.  I hope I'm lucky enough to have had yet another year of amazing RPGs to fool around in!

My Co-DM from the New Veras campaign has kindly provided his "what the DM actually saw" version of Mithan Dispara:

I can see that.  It's extra appropriate because I main Snake in Brawl.  And Mithan did love setting land mines.

On Storms of Bullets

So, a while back, Bertram the Murder-Bear wrote a review of Bulletstorm (and then a follow-up).  Now, I had been waiting to get an Xbox 360 to play this game because I was actually unaware that it is, in fact, available on PC.  On Steam, even.  Swiftjack, however, was on the ball, and told me where to buy a ticket to the rock'n'murder concert.

And what a glorious concert it was.  Despite the news that Bulletstorm was a total  financial fiasco, this game was very successful at what it set out to do, artistically if not fiscally.  Bulletstorm is to FPSes as Megas XLR is to Giant Robot shows.  It takes the genre conventions, cranks them up to parodic levels, and then wraps them in an explosive chain and kicks them of a cliff, destroying Jersey City in the process.  Most video games and giant robot shows are, to some extent, empowerment fantasies (except Evangelion, unless you're a masochist), but Bulletstorm and Megas both take this to new levels.  Bulletstorm does this in ways both subtle and blatant:  on the subtler side, its hit boxes for guns are very forgiving (once, when the sniper rifle's remote-control bullet system was bugging out, I managed to take down a large group of enemy snipers by setting up shots with the scope and then no-scoping.  I kept getting the "Show-Off" Skillshot for this, which was kind of funny).  On the more blatant end, enemies go into bullet-time when grabbed with the Leash, or kicked.  But you don't.  So yeah, they're pretty much at your mercy.  Use the Thumper and enjoy playing at Nox for a minute.  Now, this may be sort of an industry standard in sci-fi shooters these days (Mass Effect, Dead Space), but given how many gratuitous options you have in Bulletstorm, the slowdown is far more than just a few free shots.  Megas engages with the empowerment fantasy in slightly different ways, but you can't say that element isn't there.

On a more personal note, Bulletstorm caters to one of the things I want in video games (but rarely get much of), which is the opportunity for creative gameplay (also known as the ability to throw people off of cliffs, drop rocks on them, freeze them under lakes, and throw them off of cliffs).  Mass Effect (and 2) both had a fair bit of this, but it was very scene-dependent - when there were cliffs, then Shockwave became a killing machine if I could set the shot up.  On the flip side, a lot of the time, I didn't have access to terrain I could kill people with, so I just stuck with the old Reave-Shoot-Repeat combo until everything was dead for a fair number of fights.  Standard FPS fare, and enjoyable, but not as challenging an exercise as trying to optimize the number of kills I could get with a hot dog cart at the top of a staircase before blowing it up to light everyone who survived on fire (and hit them with flaming hot dogs).

You ALWAYS have terrain you can kill people with in Bulletstorm.  Ranging from the conveniently explosive trash incinerators to the giant cacti to holes in half-collapsed buildings that should never stay up (and almost never survive your destructive passing), the game offers a murderous smorgasbord of options with a side of good old dick-shooting, if you feel like it.  I never got to freeze anyone under a lake, admittedly, but you can't have everything.  I'd expect a freeze ray of some sort in Bulletstorm 2, if I thought there was going to be one.

The characters fit the setting, and the VAs were all top-notch.  Steve Blum is always on his game, but he nonetheless whacked the role of Grayson Hunt out of the park, and I can't think of anyone who could do a better Trishka Novak than Jennifer Hale.  Andrew Kishino made a good straight-man to the other leads in Ishi Sato, the murderous man-machine.  In terms of dialogue, the profanity was as obscenely creative as the violence, with writers making up disgusting new kennings (or sometimes just profane nonsense phrases) for any and every situation that the VAs delivered with palpable glee.  Though subtler, the Newsbots and occasional propaganda material gave us a glimpse into the parodically decadent, rotting culture that brought on the catastrophe that is Elysium.

The plot was serviceable - it wasn't the main attraction, but it provided sufficient motive for the main characters' actions, and despite one glaring oddity at the end, it was fairly tight.  Chekov's Gun was always fired if introduced.  It was usually fired into an unsuspecting enemy to launch him off a cliff, into a rotary fan, or just into a giant, spiked cactus.  But it was always fired.

In the end, while this wasn't as great a game as a Mass Effect 2 or as repeatably playable as a Left 4 Dead/2, it was a kick to play.  And said kick often threw an enemy off a cliff, which is always a plus for video games in my book.

So, I chose Macross Zero as my "designated show to watch whilst working out."  Overall, I enjoyed it.  I'm not going to go into the gory details, but I'll make a few comments.  Starting with my favorite (and only) Rubric for grading anime series:

-The CG robots looked pretty decent, and they were definitely a stepping-stone on the way to Frontier's amazing CG integration.  They were done intermittently with animation and CG.  This worked pretty well, though the animated shots looked WAY better than the CG ones, and that was probably its biggest weakness.

-There's more nudity than I expected, and it's fairly detailed (about what you'd expect from an OVA, but still). Watch Macross Zero in public at your own risk.  Fortunately, I was working out at home when I discovered this, and not in a gym surrounded by people who could ask "why I was watching cartoon pornography."  Reminds me of the time I saw a guy start an episode of Game of Thrones on his iPad in a gym.  Then promptly stop about five minutes into the episode, and leave.

HERE THERE BE SPOILERS:

-If I hadn't seen Macross Frontier (which retroactively explains some of the weirdness of Zero, mostly through information about the Vajra and the Protoculture), beforehand, I'd have thrown up my hands and cried "Bullsh*t" repeatedly throughout the series.  As it was, I still had to forcibly suspend my disbelief, particularly at the end, since I couldn't in any way justify some of the events besides "magic."  That is what it is, and I have long accepted that many anime finales will contain magic regardless of the original genre.  I knew this one was coming, so the blow was softened considerably.

-The story was highly reminiscent of some other mecha anime that aren't from the Macross family, per se - Escaflowne, Eureka 7, and there was even a hint of Rahxephon and Evangelion.  However, it probably reminded me MOST of a Miyazaki film.  All of the allusions, parallels, and references to non-Macross series were relatively downplayed - at least in comparison to the blaring Macross motifs and emblems that adorned this nostalgia-piece.  There has been a ton of analysis comparing it to Frontier (and I blatantly stole images from one of these analyses), and rightly so.  It's a pretty deep series, though, and I think it's a fertile ground for comparative analysis in general.

-I don't think there is ANY J-Pop in the entire show.  There was some singing in surprisingly understandable French, though.  That made me think about how there won't be any new Wakfu until September, and I'll need to keep dipping into my archives for content for a while yet.


P.S.:  The final panel was almost comprised of an image of Harvey Birdman, dressed as a magical girl, shooting Touhou lasers and blowing up the planet Earth.  But I determined that this would be even more esoteric than what I have currently (which is already altogether too obscure), and would be considerably more time-consuming to create.
Posted by Stormshrug at 2:57 PM 3 comments:

Email ThisBlogThis!Share to TwitterShare to FacebookShare to Pinterest
Labels: Blather, Macross Zero, Review (ish), What I Watched/What I Expected/What I Got

Though I wouldn't worry TOO much about the spoilers unless you haven't read A Game of Thrones.  The pattern is pretty well established by the end of that book.  Still, I'll throw in some spoiler space so you can leave. 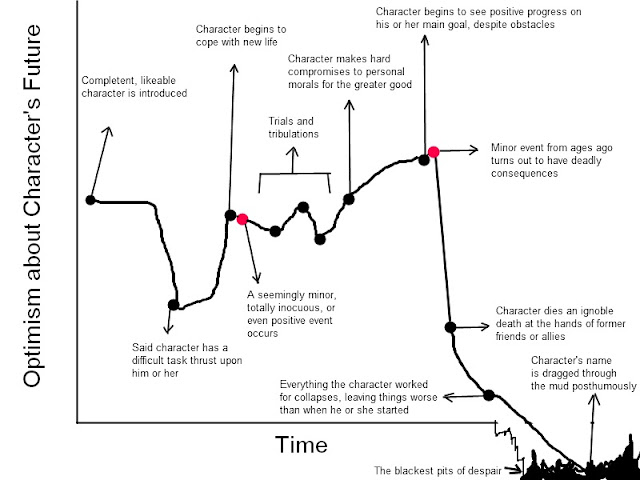