Or, A Year of Media, Regurgitated.

So, what the f*ck did I even consume in 2011?  For fun, that is.  I'm not including class work from the Spring or work work from the Fall.  Except Pluto, because I read volume 1 and then found the rest on my own for curiosity's sake, and it was great.  Also not counting anything that I re-read or re-watched, because that's too much trouble to track.  No more questions!

Also, instead of reviewing, I am doing haiku.  Do not expect me to properly employ the kireji, because lolEnglish. Nature allusions will be strictly hit or miss.


I've written a bit about Broken Blade here before, and I will probably do so again, because it's a really interesting series and it is SOO CLOOOSE to being my perfect show.  So much so that I actually preordered the DVDs when I saw they were coming out.  It really has it all, for me:  Giant robots, check. Medieval setting, check.  Strong character dynamics, check.  Pacing... not so much, especially towards the end.

On a tangent, one fascinating theory I've heard: "Delphine" is in fact a double-localization of "Tyrfing." Does this make the series' complex mythological allusions more or less muddled?  I'm not sure, but I'm still enjoying the ongoing manga, even if it's SLOOOOOW. 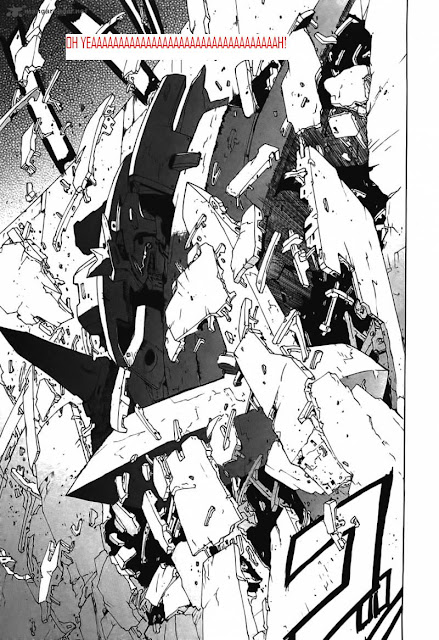 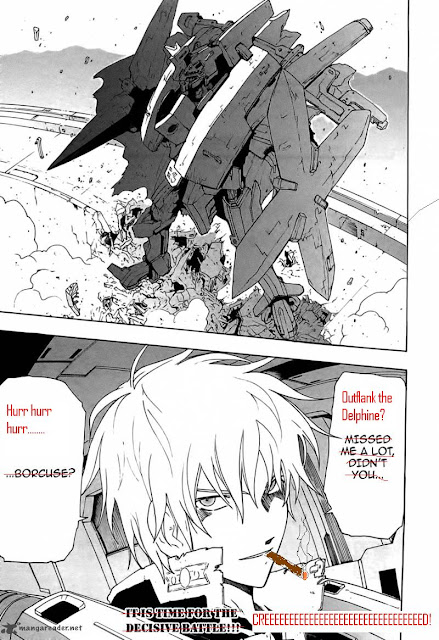 Come for the heroes,
They were in your last campaign,
Stay for the villains.

Wakfu was a real surprise for me, flying out of left field in the middle of a busy finals week and hitting my unsuspecting productivity square in the head. I had the whole series spoiled for me before watching it, but it still managed to surprise me on numerous occasions.  Its slick animation style (barring a few episodes in the mid single-digits) and self-awareness drew me in, but it was the dramatic arc (and amazing battles) of the first season's secondary characters that really convinced me. 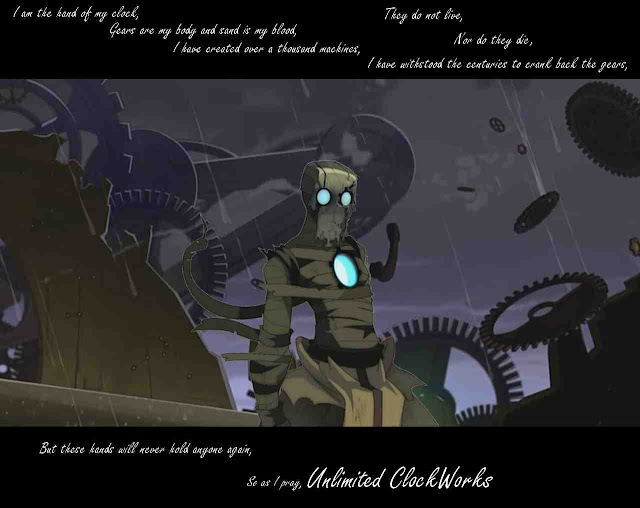 Blood-C was bad, and it made me feel bad.  Odd and creepy confluence of sex and violence aside (well, MOSTLY aside), it had the single worst "twist" in the history of sh*tty twEEEEEEEEEEEEsts and it took itself seriously the whole time.  Unless it's all just CLAMP trolling us...

Legend of the Millennium Dragon

Time travel hijinks,
I don't remember much but
It looked very nice.

Starts as Code Geass,
But bad, things happen and then
Lannisters ensue.


Mythical heroes,
Tale of despair and (a) man,
Shirou was a drag.

Gundam for children?
Cutesy character designs
All of the murder.

Here's one I did not expect to be good.  AU Gundam is, in my mind, pretty much crap; the only thing I like about it is that Sunrise has the decency to create alternate universes for all of it, so that I don't have to live with things like Gundam Seed crapping up the Universal Century timeline.  This series, however, has been solidly enjoyable so far, and the second arc has been even better than the first.  Of course, it's Sunrise, so now that I've written something positive, a third-act ball-drop might be in the works, but still.

Okay, yes, it's true,
Get it out of your system,
The title is lulz.

I think I accidentally caused a My Little Pony: FIM fan to watch this show by a casual mention of the title alone.  Not sure what just happened there...

I'm not done yet, blah blah.  Sue me, it's pretty good, but it's just kind of slow. Too much school, not enough killing metaphor bugs.

It's a fairly blatant Gundam clone, but in theory, I should like that.  And if the animation was just a bit more up to date, or if the fansubs were less comically awful, I could probably swing it more easily.

To the reckless kids' credit, they're pretty compelling characters as human sidekicks in Transformers go.  But this show is about Optimus Prime, Megatron, and, of course, Steve Blum.  I mean Starscream.  Steve Blumscream.

Hellsing Ultimate
So, you know that he
is called the Count. Because he
really loves to @#$#.

This is one I didn't expect, but ended up loving. The best of shows like S-Cry-Ed but with a much more compelling narrative and interesting characters.  I am waiting to get a new computer before watching the last episode (because watching it without the projector seems wrong).  Here's to hoping it isn't a total BONES ending.

Young Jusice was in interesting show to start alongside Tiger and Bunny, because they both took a slightly more "realistic" take on the concept of the superhero - T&B tackles the capitalization of the super in a world dominated by corporate politics, while Young Justice deals with the militarization of the super in a world where superheroes are political actors as much as vigilantes.  Young Justice, however, is vastly more successful in several regards: its meta-plot is interesting and its villains are complex and clever (they are, after all, from the guy who brought us David Xanatos), but more importantly, the heroes really have heart.  Also, the show addresses my primary pet peeve with its teen hero series predecessor, Teen Titans - it answers the all-important question: "WHERE THE F*CK IS THE GODDAM BATMAN IN ALL OF THIS?" The teen superheroes exist - and struggle to exist - in an adult superhero world, which works very well for the series. 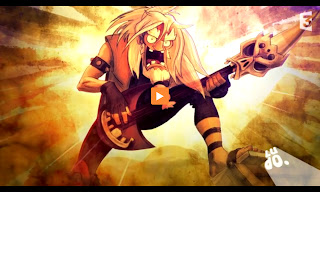 
Nurarihyon Season 2 (failure to finish at its finest)

Expected more of
the same, got more of the same
I'll watch it later...

Shepherd. Wrex. Shepherd.
Wrex is a boss and if you
let him die, redo.


This was the greatest game ever.

In the grim darkness
of the far future, there is
only war and stuff

This game may not have been the financial success the ailing THQ needed it to be, but it was the artistic success that I wanted it to be. Captain Titus was a surprisingly interesting protagonist, but, in all regards, he felt like the Emperor's Angels of Death are supposed to feel, both in conversations and on the battlefield.  Especially on the battlefield.  While plowing through hordes of charmingly British Orks.  I really need to replay this game.  And we need to play Exterminatus Mode FFS, Bearmetal.

Raised questions, answered
none. Would be disappointed,
busy chainsawing.

Gears of War ended as it started, with no answers except a chainsaw in the face and no narrative closure except murder.

I can deal with that.

Divinity 2: Ego Draconis (or, as all my friends know it, "F*CKING FRUSTRATINGLY HARD RPG RPG")

Be a dragon they
said, and it's pretty sweet, but
you can't burn it all.

The above haiku covers this game.  Although it's sans-DLC ending is WAY more aggravating than Mass Effect 3's ending.  The DLC clears it up, though (and was fairly obviously just content cut from the original release due to time).  It'll be interesting to see if the ME3 DLC does the same thing for that game.

German Robo-cop
(not Robocop) is the best
hero in ages.

This comic blew my mind. Do want anime adaptation.

(YEAH YEAH, I'LL GET AROUND TO WATCHING MONSTER SOONER OR LATER.)

A Dance with Dragons 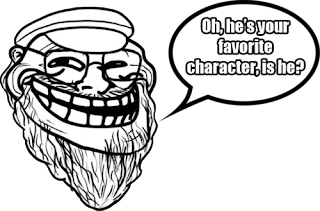 What if Lex Luthor
won? Well for starters it would
not make him happy.

Empire is a comic book series, published by DC, that posits: what if a very Lex Luthor-like villain (who cribs heavily from Iron Man's wardrobe) took over the world using the power of drugs and raw, unrelenting F*CK YOU?  What would a society that he ran be like? Would people be happy? Would he be happy? (spoilers: no).

Empire's crowning success is that Gogotha is a terrible person, and yet it makes him relatable, in certain, small ways, without ever revealing the full backstory that made him the way he is. It's a work with a lot of subtlety, a lot of nuance, and a lot of people getting blown up / eviscerated / atomized.

How do you stop those
Superheroes for all time?
World peace and trolling.

Halcyon was another interesting comic book series I picked up for free from the break room. The premise is that, one day, humanity's urge to commit violent acts instantly disappears.

So, yeah, it's pretty much Bearmetal's personal circle of Hell. Also, superheroes have to deal with being... useless.  It's interesting, but ultimately a much weaker work than Empire, because it requires more suspension of disbelief and has a much less well-developed villain.


Well, I'm sure I forgot some stuff, but that's my media year-in-review.