(Or: the part of the trip for which I have few photos): 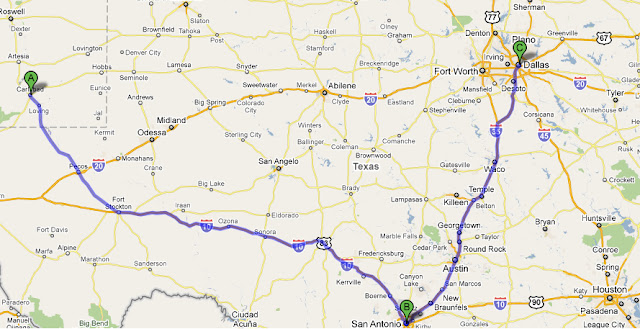 Day 10:
Drove from Carlsbad to San Antonio.  I was starting to feel moderately better at this point, but it was a long drive.  We got in relatively late, hopped from motel to motel  price-comparing until we found a place for 45 with one bed and AC.  The bulletproof glass behind which the attendant was seated didn’t inspire confidence, nor did the “NO HOURLY RATES” sign, but you take what you can get, and it seemed far enough from the tougher parts of town we had driven through.  We then headed back to the urban center of San Antonio, and went to a Pat O’Brien’s, a bar based on a New Orleans speakeasy built by an Irishman, and later copied in San Antonio.

The river running through the city is interesting – it’s very isolated from the rest of the city, because it’s on a lower level (down by the river).  The food was decent, but we were both very tired at this point.  We headed back to the motel, watched a few episodes of Wakfu, and then went to sleep.
Day 11:
We woke up as early as we could (10:30am), and went to the Alamo, to satisfy my history major traveling partner’s desire to see historically important places where lots of people killed each other. 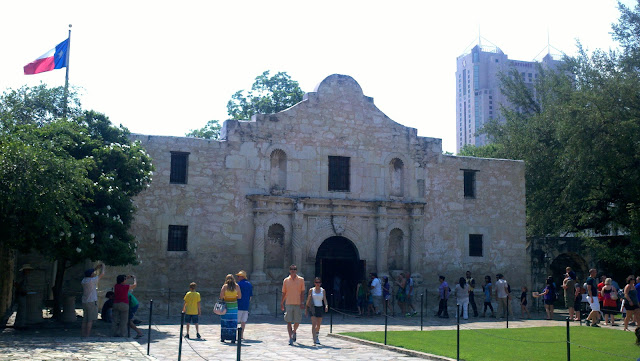 The site was actually quite well preserved, and had a lot of historical artifacts.  The barracks had been converted into a museum, and we were able to see that, but the church itself had a line longer than the whole park to get in, and so we decided to make our way.
After grabbing lunch at a place called Iron Cactus down on the river, we started our drive to Dallas.  The riverside area was (mercifully) less crowded at noon than it had been the night before. Also saw this as we exited the city.  Sadly (or perhaps, thankfully) it was not open at noon. 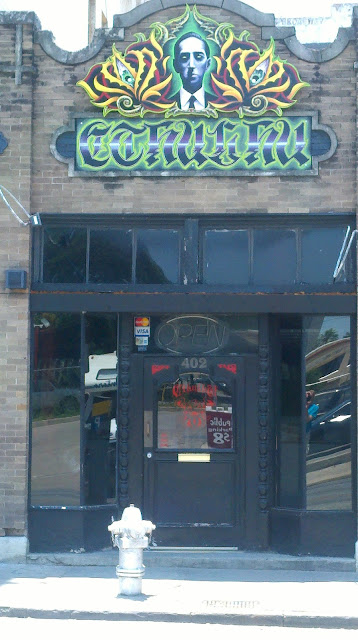 Several dozen road games later, we got in, and met up with my traveling partner’s cousins, who were kind enough to put us up for the next two nights.  We hit up a(nother) Mexican restaurant, then bar, and I tried some sangria, which was mediocre, and then played Apples to Apples while one cousin’s fiancé got increasingly drunk and dug himself deeper and deeper into a hole of pre-marital couch-exiling.
After going up to the roof for a while, we headed back and hit the sack for the night.
Day 12:
Got up around 11:30, grabbed some lunch at a place called Ozona, and then watched some stand-up comedy and movies.  Ordered pizza.  Watched more movies.  Did nothing I couldn't have done elsewhere, but it was nice to relax and helped me get over my cold.
-Stormshrug
Posted by Stormshrug at 1:29 PM No comments:

On the Bat Cave

At the time I wrote this entry, I was suffering from the worst of my cold.  As such, it is a bit more terse (as in, "what is a Subject?") than my usual writing style, but I decided to preserve it for the sake of posterity:


Slept miserably, due to the worsening sore throat.  Walked to the nearby convenience store at 3:00am, but only encountered a bemused police officer filling up his gas tank, who told me it opened at 5.  Went back to the room, watched anime and read comics until 5:30, when tiredness finally overtook the pain in my throat.

Slept until 9.  Took shower, felt tolerably more human.
We left the Stagecoach Inn in Carlsbad and headed to Carlsbad Caverns around 11.  We explored the caverns for the next two hours.  The walk down was about a mile and a quarter, though you only descend 800 ft under the surface of the earth.  I perked up as we went, drugs helping to make up for the part of my miserable condition caused by the cold, though not by the lack of sleep.  Fortunately, though the hike was advertised as being “strenuous,” it was paved the whole way down, with guardrails and everything. 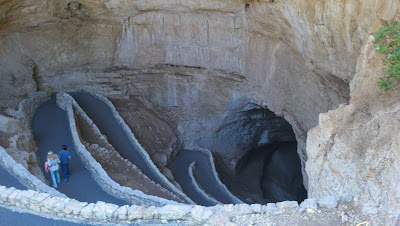 These caverns are MASSIVE.  It’s hard to explain unless you’re inside, but as my travelling partner put it, he expected to run across a treasure room at any point during our visit.  I, for one, was expecting something more akin to a horde of orcs.  They’d certainly fit, and they could play multiple simultaneous games of football inside to boot. 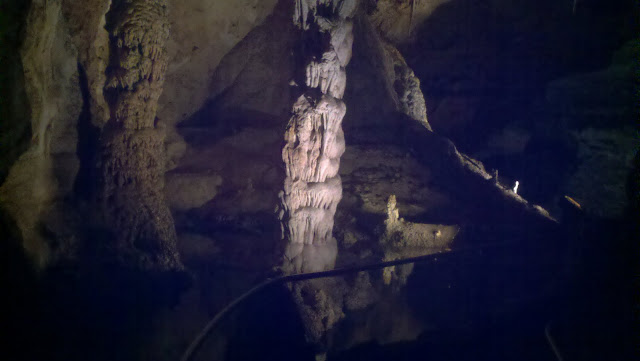 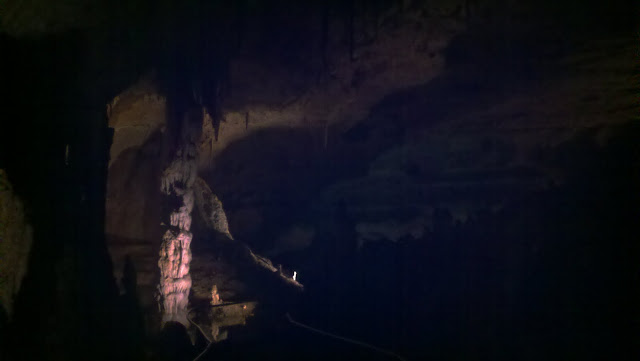 They’re also filled with a multitude of amazing geological formations. 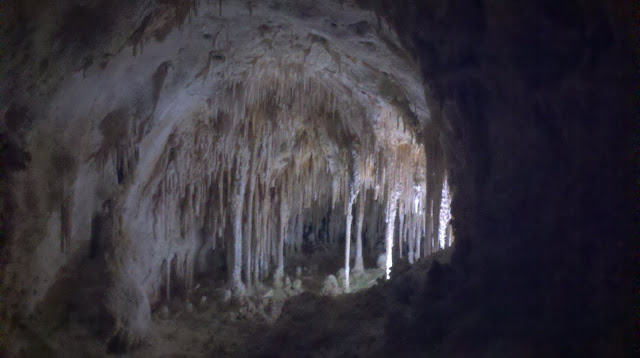 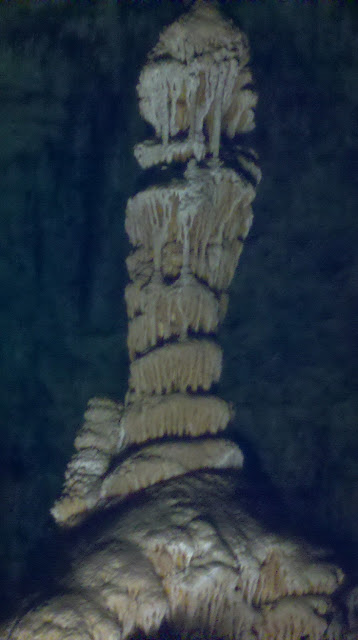 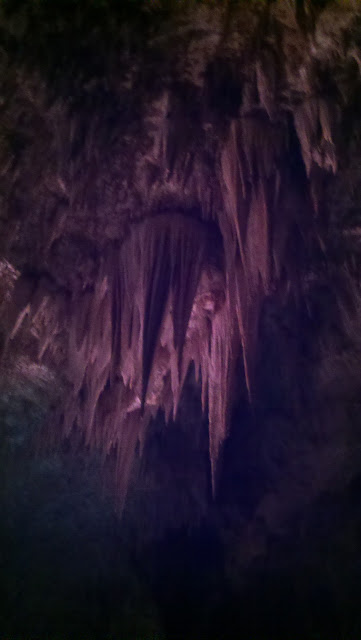 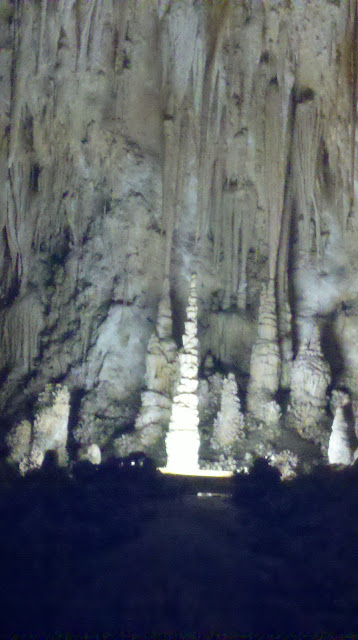 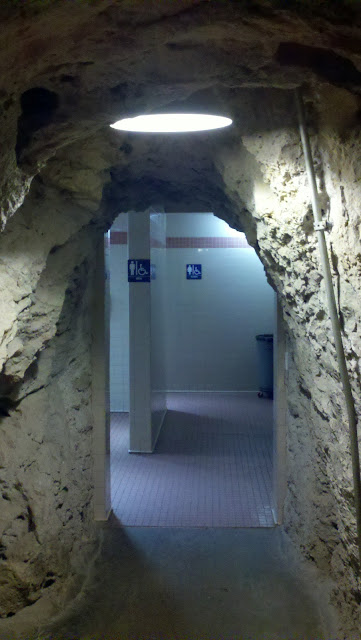 We stopped at the café in the cavern for lunch, and then did the other half of the self-guided cavern tour before returning in the elevator, which hit the surface in just barely enough time for the attendant to bring a joke to a close with an awful “eleVader” pun.
We then drove back to the hotel and I took a badly-needed nap (the drugs, the hike, and the food synergizing rather nicely for once).  We grabbed dinner on the way back out to the caverns, where we planned to watch the bats depart the cavern at dusk.  You're not allowed to photograph the bats in flight (the subsonic camera noises bother them, apparently), but here's the stage just before showtime: 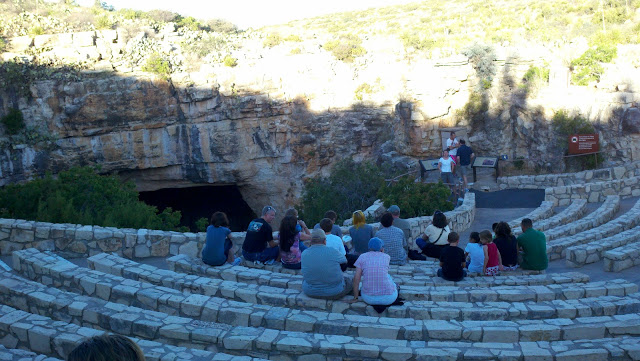 Worryingly, when we arrived at the cavern mouth, the ranger on duty (“Rick,” or so he claimed) said that it was fairly likely there would be no bats that night.  The lack of rain for the last few months meant no plant growth, which meant no insects, which mean that the migratory Mexican Freetailed Bats who frequent the caves during the summer might have gotten with the migratory part a bit early in search of better food supplies.  The lack of bats as the sun dipped below the horizon almost lead me to premature disappointment.  But then the bat-signal went off (no, regrettably, it was just a static-y buzz, not a giant bat-emblem blazing in the sky)!  Ranger Rick warned us that it might be a false positive.
As we confirmed a few minutes later, however, there were some bats in the cave, and although it was not the overwhelming 400,000 that leave the cave each night during the height of summer, there were still a great many exuberant scraps of shadow that came flitting out of the cave’s mouth at dusk.  We watched the bats until the light went out, and then made our way back to the hotel.